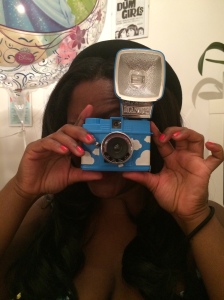 Due to my most recent decision to extend my challenges I’ve now taken a much more relaxed approach to my everyday activities.

However opportunities are wont to strike, and on a Friday, during a Work’s leaving do, strike they did. After a few (who am I kidding, it was more than a few) drinks in the City we decided to head over to Forge for some dancing. En route from Gresham Street, as we walked past Anthologie I spied (with my large eyes) a rather attractive man. He was smiling my way so I decided to take the plunge and went over to say hi. We chatted briefly (although I can’t really recall what about) but as my companions were getting further and further away, I bit the bullet and asked for his number.

It wasn’t until a week later when I was sat down to lunch coincidentally at Anthologie with my friend JG that I even remembered what I had done the Friday before. After my brief flashback I was telling her about my momentous achievement and I dug out my phone to show her the proof, only to discover that I’d saved him in my phone as ‘Phil Anyhogie’ Anyhogie being my drunken attempt at spelling Anthologie. I was clearly the picture of sobriety when we spoke. Suffice it to say I was too embarrassed to message him as I feel its a poor show to take someones number and not text straight away.

Once we reached Forge I was in my element the music was pumping and the prosecco was flowing (like I needed anymore) and for the second time that night (albeit due to the copious amounts of alcohol I’d consumed) I spotted a somewhat attractive guy. Again he was looking my way, so I locked eyes on my target and sashayed on over to where he stood. After a couple of pretty energetic dances (if I do say so myself) I toddled off back to my chums, needing a sit down and a restorative drink. My new found friend decided to follow me back to my table and we continued to have a conversation for a little while longer.

The next morning the uni girls and I had planned a night out in Liverpool. We arrived at Liverpool Lime Street at lunchtime to be met by the biggest stereotype that I wasn’t even aware existed until that point. Girls walking round the streets with their hair in rollers, ‘Desperate Scousewives’ has a lot to answer for. Before we could check in to our fabulous hotel we went for a few tapas and sangria (starting as we meant to go on). Over lunch I updated the girls on my self set challenge and the resultant blog, I then informed them that I either needed to compliment a man or tell a guy a joke. After we ate, we headed to The Shankly to start getting ready and make a dent in the numerous bottles of Prosecco we’d brought with us.

The first place we headed to was O’neills to watch the Australia v England match. The bar was filled with wall to wall men and although I had a brief introduction with a sweet man on crutches it wasn’t really the time or the place to start trying to divert their attention. Their eyes were glued to the all important knock out match, and unfortunately for England, although fortunately for every other country in the UK England lost. There was a cacophony of cheers and sighs as the match ended.

After the game we headed over to Alma de Cuba for cocktails and dancing. Then we moved on and stumbled across a bar called Level, actually I think one of the locals may have recommended it. As soon as we stepped inside CH was determined that I should do one of my tasks there and then. She can be quite belligerent when she’s had a few. After a little dancing and exploring all the levels (it’s an apt name) of the club a really sweet boy started chatting to me and even offered to buy me a drink, however I had to politely decline as he was so young, but hey at least I can still pull a young’un. Later on I sighted a guy with a pretty cool tattoo, after some not so gentle encouragement from CH I approached him and told him that I liked his tattoo. (That’s an adequate compliment right?) As I like to demonstrate that I have in fact learned from my previous errors, I tried to continue the conversation by asking him a few more questions and we spoke about his and my various tattoos and how many hours (HOURS?) his took for a few minutes longer.

Later that night I concluded that I could probably attempt one more task, and I resolved that I was going to tell a guy a joke. This certainty was quickly replaced with the realisation that I should probably have prepared a joke to tell. Suffice it to say I improvised, I started chatting to quite a few men actually and rather than impressing them with my wit and making their sides ache with laughter, I asked them if they knew any jokes. Sadly my attempts didn’t really work as not one of the several guys I asked knew any off the tops of their head. But hey I’ve decided it’s the thought that counts, although in the future I will be better prepared.

Yes guys, I am still going…

One thought on “A night in the Pool”